Can Australia handle having a stronger, richer neighbour? 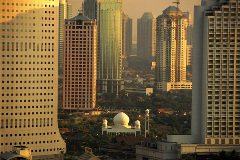 But we are missing the big story. Indonesia’s economy is growing so strongly that, according to Citibank, it will be the fourth largest in the world by 2040. Our big neighbour will then be three or four times richer than us. Already its GDP has overtaken ours by about 15 per cent.

Of course, Indonesia still has deep problems that could derail its growth, but we would be dumb to bet on that. We’d be much smarter to start asking what we will do if Indonesia quickly draws ahead to become richer and more powerful than us.
Advertisement: Story continues below

It still seems part of the natural order that Indonesia is poor and weak, and we are rich and strong, because it has always been that way. Until now we have never had to deal with a close neighbour as wealthy and powerful as us. Living next door to a great power is a new experience for us, and it may not be a pleasant one.

It will not be easy. No two neighbouring countries in the world have less in common with one another, so we can never take the relationship for granted. But that is just what Canberra has been doing for the past 15 years. Our links are dominated by third-order issues such as people smuggling, live cattle exports and drug offenders.

The government says the relationship ”has never been stronger”, but, after two years as Prime Minister, Julia Gillard has never taken the time to make a proper bilateral visit to Jakarta. Indeed, Kevin Rudd’s trip in June 2008 may be the only formal bilateral visit to Indonesia by an Australian prime minister since Suharto’s fall 14 years ago. Compare that with Paul Keating’s energetic and imaginative diplomacy in Jakarta.

The government says our massive aid spending is the key to good relations. Indonesia is our largest aid recipient, getting more than half a billion dollars next financial year. But this money has become a substitute for serious political and diplomatic engagement. It cannot buy the relationship we need with Indonesia when it becomes a great power.

We are kidding ourselves if we think they need our help to succeed, and we are kidding ourselves if we expect any gratitude for trying. No one likes receiving charity, especially from neighbours. Those who offer it are more often resented than thanked. In fact, the more Indonesia grows, the more our aid program damages rather than fosters the kinds of links we want with them.

Today, 14 years after Indonesia embarked on the road to democracy, our relations are still weaker than they were under Suharto, and engagement between us has gone backwards – symbolised most starkly by the decline in the study of Bahasa Indonesia in our schools and universities.

And yet both our risks and opportunities grow as Indonesia grows. Consider the strategic relationship. Indonesia is the only neighbour that can pose any serious military threat to us, and it is the only one that could be a really strategically valuable ally. In both respects, it will become more important to us the stronger it becomes.

On the one hand, its naval and air forces will grow steadily, shifting the military balance and increasing Indonesia’s capacity to threaten us. On the other hand, if rivalry grows between Asia’s great powers over the next few decades, Indonesia’s strength might be vital to our security, helping keep their struggles far from our shores. Then we would want to work Indonesia into a new form of ”forward defence”. Indeed, in future decades Indonesia could become our most important strategic partner.

We are a long way from that today. Where should we start? First, we must give the relationship the priority it deserves in our foreign policy. It is far more important than NATO, Afghanistan, the UN Security Council bid and much of the vapid summitry that consumes so much effort today.

Second, we must refocus, away from third-order issues such as people smuggling and cattle exports, and towards the first-order strategic and other challenges we face. Third, de-emphasise aid in the relationship, and spend the money instead on a program to send large numbers of young Australians – perhaps 10,000 a year – to Indonesia to learn Bahasa and get to know the country.
Finally, restore the political consensus between our major political parties about the centrality of the relationship to Australia’s future. Until 1998 both parties recognised that this relationship was too important to play politics with. Since then, leaders of both sides have lacked the political courage to speak out in favour of the relationship in terms that do justice to the issues at stake. We will not get Indonesia right until someone starts to do that.

Hugh White is professor of strategic studies at ANU and a visiting fellow at the Lowy Institute.

This entry was posted on Tuesday, May 29th, 2012 at 13:16 and is filed under Berita-berita Menarik, Refleksi tentang Indonesia. You can follow any responses to this entry through the RSS 2.0 feed. You can skip to the end and leave a response. Pinging is currently not allowed.